Things I liked about some American authors

Lionel Shriver: Anyone can write a bad book. But fiction is a high-risk form of work. Writing my last three books, I wasn't sure that the whole project was working until I wrote the last page. I'd have put in a couple of years, and the entire time I was living with high anxiety, writing blind into the fog. I find as I get older, I get less confident. I will have read more, have an appreciation for how much out there is good and how many have failed. I don't assume any sentence is good just because I wrote it. [Full story]

Joyce Carol Oates: Ms. Oates says her ideal work day starts around 8 a.m. and lasts until early afternoon. She writes by hand in notebooks and on scattered scraps of paper at a large desk in an upstairs study overlooking the garden. She types up the manuscript and keeps her notes on hand as a guide; eventually, they go into her archive at Syracuse University. Her office has two tall bookcases filled with her own books—she rarely has time to reread any of them, she said—and separate shelves with other treasured works, including a 1948 edition of "Alice's Adventures in Wonderland" that her grandmother gave her when she was 8 years old. Bowls of cat food and water for her cat Chérie sit on the floor near her desk. [Full story] Don DeLillo: One reason why I use an automatic typewriter, particularly this one, is because it has larger-than-usual type. I like the tactile quality of the typewriter and the sense of hammers striking the page and fingers hitting the keys, and the shapes of letters themselves, yes. I lived in Greece for a while and that's where I realized that the alphabet is an art. It's a visual art as well as being a crucial means of expression, and as I learned the Greek alphabet I started looking at letter shapes as I've never done before. [Full story]

[......] His approach to writing borders on obsessive. He fixates on the shapes of letters and words, and judges each phrase for its visual appearance as well as its rhythm and clarity.

He likes word combinations where one word surrounds another, such as "raw sprawl," says Ms. Graham, his editor at Scribner.

Sometimes, Mr. DeLillo says, he will swap out a word for a more rhythmically appealing one, even if it alters the meaning of the sentence. He often types up a single paragraph at a time, using a clean sheet of paper for each paragraph, so that he can study the architecture of each passage in isolation. [Full story]

[......] Mr. DeLillo is 73 now and considers himself a late bloomer. He didn’t publish his first novel until he was 35, after quitting a job in advertising and after what he calls “a golden age of reading,” in which he would “consume fiction as if it were breakfast cereal.”

Asked why his first book took him so long, he answered: “I don’t have any explanation for that. All I know is that one day I said to myself, ‘I think I’m a writer.’ I started making sentences I didn’t know I was capable of.” [Full story]

Zadie Smith: I don't like to write something unless I feel I really must. [Full story] 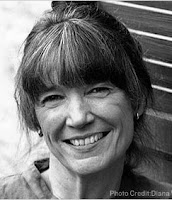 r: Point of view is not something I consciously decide. Almost always, when I come up with a plot I find that the point of view has automatically arrived with it, part and parcel of the story.

The first-person viewpoint is more enjoyable to write, because it lets me meander more freely, and it can reveal more of the character's self-delusions. Really all the advantages are with first-person, so I'm sorry I don't get to pick and choose. There's surprisingly little difference between writing from a male angle and from a female angle, but I feel more restricted in my language when I'm writing as a male character because males tend to sound less emotionally expressive than females.

I have to work doggedly for my plots, but then a few days after I've figured one out, the first sentence will simply float into my hearing. For A Patchwork Planet: "I am a man you can trust." Or for Dinner at the Homesick Restaurant: "While Pearl Tull was dying, a funny thought occurred to her." That's how I learn what the viewpoint should be. [Fully story]

, he will swap out a word for a more rhythmically appealing one, even if it alters the meaning of the sentence. He often types up a single paragraph at a time, using a clean sheet of paper for each paragraph, so that he can study the architecture of each passage in isolation.