Books in the NYC Subway 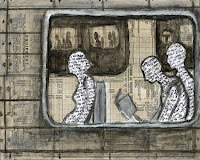 These are some of the books that I’ve seen that people reads while riding the Subway in New York:

'Uncommon' by Tony Dungy
Super Bowl-winning coach and #1 New York Times bestselling author Tony Dungy has had an unusual opportunity to reflect on what it takes to achieve significance. He has worked every day with young men who are trying to achieve significance through football and all that goes with a professional athletic career —such as money, power, and celebrity. Coach Dungy passionately believes that there is a different path to significance, a path characterized by attitudes, ambitions, and allegiances that are all too rare but uncommonly rewarding. Uncommon reveals lessons on achieving significance he’s learned from his remarkable parents, his athletic and coaching career, his mentors, and his journey with God. See more.

'Houses by mail' by Katherine Cole Stevenson
A delightful look at America's past. From 1908 to 1940 some 100,000 people purchased their ready-to-assemble homes from Sear's mail order. Presented here are approximately 450 models sold by Sears together with a description, a picture, floor plans, prices and locations. See more.

'Critic of cynical reason' by Peter Sloterdijk
A philosophical treatise which finds cynicism the dominant mode in contemporary culture. In 1983, two centuries after the publication of Kant’s Critique of Pure Reason, another philosophical treatise—polemical in nature, with a title that consciously and disrespectfully alludes to the earlier work—appeared in West Germany. Peter Sloterdijk’s Critique of Cynical Reason stirred both critical acclaim and consternation and attracted a wide readership, especially among those who had come of age in the 1960’s. See more.

'Marching forward Hell -America and Islam after Irak-' by Michael Scheuer
When Michael Scheuer first questioned the goals of the Iraq War in his 2004 bestseller Imperial Hubris, policymakers and ordinary citizens alike stood up and took notice. Now, Scheuer offers a scathing and frightening look at how the Iraq War has been a huge setback to America's War on Terror, making our enemy stronger and altering the geopolitical landscape in ways that are profoundly harmful to U.S. interests and security concerns. See more.

'America, America' by Ethan Canin
In the early 1970s, Corey Sifter, the son of working-class parents, becomes a yard boy on the grand estate of the powerful Metarey family. Soon, through the family’s generosity, he is a student at a private boarding school and an aide to the great New York senator Henry Bonwiller, who is running for president. Before long, Corey finds himself involved with one of the Metarey daughters as well, and he begins to leave behind the world of his upbringing. As the Bonwiller campaign gains momentum, Corey finds himself caught up in a complex web of events in which loyalty, politics, sex, and gratitude conflict with morality, love, and the truth. Ethan Canin’s stunning novel is about America as it was and is, a remarkable exploration of how vanity, greatness, and tragedy combine to change history and fate. See more.

The novel is a powerful insight into the lives and values of the so-called "Lost Generation", chronicling the experiences of Jake Barnes and several acquaintances on their pilgrimage to Pamplona (Spain) for the annual fiesta and bull fights. Barnes suffered an injury during World War I which makes him unable to consummate a sexual relationship with Brett Ashley. The story follows Jake and his various companions across France and Spain. Initially, Jake seeks peace away from Brett by taking a fishing trip to Burguete, deep within the Spanish hills, with companion Bill Gorton, another veteran of the war. The fiesta in Pamplona is the setting for the eventual meeting of all the characters, who play out their various desires and anxieties, alongside a great deal of drinking. See more.
Publicado por Javier García
Enviar por correo electrónicoEscribe un blogCompartir con TwitterCompartir con FacebookCompartir en Pinterest
Etiquetas: Books, Hemingway, lectura